A Guest Article By Mark Beresford

It’s fascinating how the love of camping and living outdoors can evolve over time. As a youngster and later as a couple we enjoyed many camping holidays both with family and friends.

We wanted to share that love of camping when our own children were born and yet little did we know how one stormy camping trip to Anglesey would change that. To be fair it was a number of things that happened in quick succession to change how we would camp in the future. The first time we took the children camping in Anglesey, the worst summer storm we’d ever experienced battered our poor tent and we had to abandon the campsite to the elements. Not long afterwards, our son Joel was diagnosed with Autism. To cap it all the recession hit and work for my landscaping business dried up.

It was time to reassess our plans for the future and after much thought we had a reversal of roles in our family. My wife Laura was able to pick up some extra work whilst I stayed at home and became the “house husband” caring for Erin and Joel. Now I’m not the type of guy who can lounge around all day supping beer in my string vest whilst watching daytime TV. I needed a project to focus my mind and something we could all benefit from. After our recent camping disaster, I recalled how we looked on in envy at the family next to us who rode out that summer storm with ease in their snug campervan. 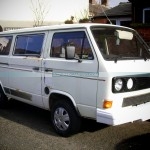 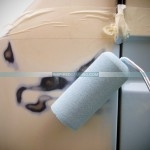 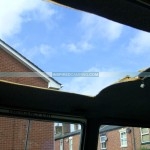 We made the decision that if we were going to “Carry on Camping” in our unpredictable British weather it would be in the comfort of our own VW campervan. However, it quickly dawned on us that VW campervans were not cheap and our budget was small.

The only one we could afford was a VW T25 Danbury conversion that we got off Ebay for £1400. To say that it was rusty would be an understatement but undaunted I vowed to restore her back to her former glory over a year or so via a rolling restoration. Alas, it quickly became clear that the rot was deep and our pockets were shallow, and after four months I sold her on. Despite this setback we kept searching until one day we sported an ex taxi late model VW T25 on Ebay. Clearly unloved but solid, she was crying out for some TLC. After parting with £900 and a long journey home at 50 mph she sat outside our house and I was grinning like the Cheshire Cat. 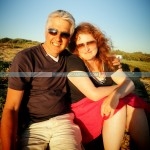 We drove her around for a while as we drew up our plans to convert her into a camper. After about a month, our plans were drawn up and we set about sourcing the bits we would need to build our “bespoke” camper on a paupers budget. Many of the bits came off Ebay like the hightop roof, flooring, seat cushions, sink, fridge etc. The units and cupboards were modified Ikea kitchen units and the front seats were from a VW club member. As you can see, I cast my net far and wide, often travelling hundreds of miles to collect items. 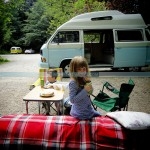 The key to success in building your own campervan is research and patience as building the camper had to fit in with every day life’s demands. It was nice to involve the family in building her although it was scary at times, for example when cutting a hole in the roof, but the sense of achievement was immense as it was all my own work. It took about 6 months to initially finish the camper, which included painting her using a roller and special paint (I’m serious). The best bit about doing it yourself is the cost – £900 for the van and then another £1400 over 6 months to convert her. For £2300 we got our homemade bespoke budget camper and no more storm ravaged sleepless nights.

So if you fancy your own campervan but can’t afford the mega bucks they demand these days, roll up your sleeves and have a go yourself; maybe one day you will peer out of the window of your snug campervan at the poor souls trying to pitch their tents in a howling gale and a warm smugness will make you smile from ear to ear….”Carry on Camping”.

You can connect with Mark at his blog The Campervan Man