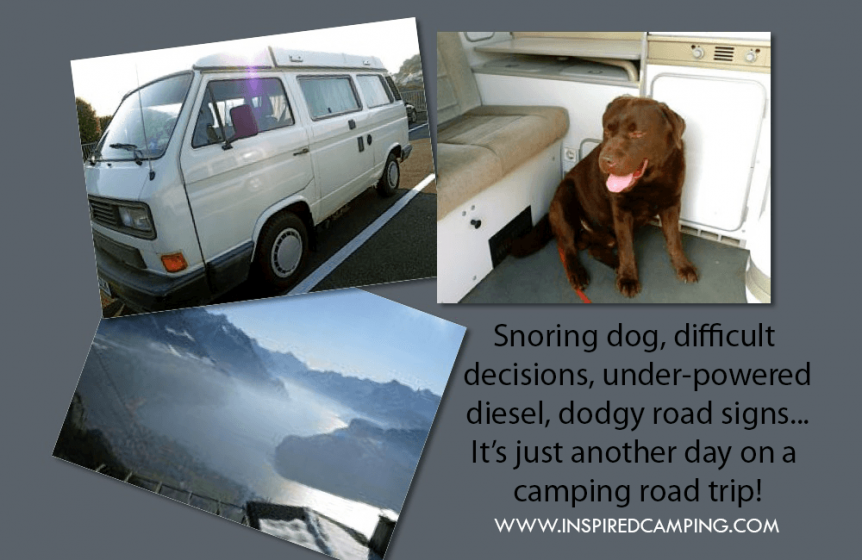 Looking back I must have been half mad though at the time it all seemed so logical. Sell my tiny VW Lupo, buy an old VW camper big enough for Angus (Chunky Chocolate Labrador) and myself to transport everything to the Italian Alpine town of Biella for three months. Trouble was I lived near Edinburgh and Biella was a hell of a long haul south totaling almost 2000 km, with the English Channel and mighty Swiss Alps standing in the way.

Obsessively scanning sites for suitable campers I eventually decided to drive north to Dundee to inspect a 1990 VW Westfalia California 1600cc (non turbo) pop-top in white. Well ʻoff whiteʼ to be exact as I wasnʼt sure it was an official VW colour, natural time travel discoloration or ingrained dirt.

Ummʼd and areʼd over the price, accepted it wasnʼt showroom condition but at 25 years old with over 200 km on the clock weʼd all look a little worse for wear. Coughed up a deposit, prayed Iʼd made the right decision. Anxiously driving home in my small car with one confused Labrador puppy asleep in his travel crate, I had an uneasy feeling Iʼd made the worse decision of my life – well one of them!

Had I paid too much, would the insurance, maintenance, MOT and fuel consumption cripple me? I needed to relax and believe in the VW camper reputation, accept the hype and established mystique around why they last so long and have become the coolest campers of all time.

Four days later the previous owners arrived to deliver Lucy. Yes Iʼd already chosen a name based on my fat, NHS bespectacled, grandmother, who as a cleaner in a local cinema had still cycled four miles each way to work, aged 65. Nothing would, nor could stop her, she was a battleship on a bike. Built as well as an old London bus she did everything to protect us as kids in post WW2 West London. I was hoping Lucy 2 would do the same by being dependable, reliable, roomy and never break down. She epitomized my new camper in all but power. I think the original Lucy, had more!

The estate agent was late. We couldnʼt leave Scotland without handing over the keys and getting our deposit back on a ground floor flat that had seen me through some painful knee replacement surgery. Once there she complained Iʼd ʻnot cleaned the toilet well enough, left the lawn half an inch too long blah blah blah…ʼ trying every which way to get out of reimbursing my deposit.

An hour after planned, though cash in hand, I could still hear her moaning as we drove off towards our new life. Angus had already decided that the corner between the Rock and Roll bed and mini fridge was his. Iʼd hoped he make a good navigator but at eight months old, was probably expecting to much!

Crossed the border into England, flew past Manchester, survived Birminghamʼs manic motorway system and was almost onto the M40 when at one service stop I couldnʼt find second gear. Quick call to my eldest mechanically minded son and we were on our way again.

OK I admit taking thirteen hours from Scotland to West Sussex seems a touch too long, but we were loaded down and lost in concentration wanting to make sure we made it in one piece rather than break the land speed record. Parked up for a few nights on his drive before finally waving farewell and heading towards the midnight Dover to Dunkirk ferry where at Passport Control reverse gear crunched so loudly the lady examining our passports, hit the ground thinking she was under attack.

Excited that weʼd soon be on “the Continent”, then disappointed, verging on depressed at discovering Dunkirk in the middle of a cold winterʼs night! ʻNo matterʼ I said to myself, heading on towards Lille automatically thinking there would be signs for ʻMonsʼ. There weren’t until weʼd gotten lost in the city centre where I gave up and decided on a total route change (Plan ʻBʼ) via Paris, because in France all roads go to Paris. Then suddenly, on our way again, 100 meters past a place I recognised Iʼd gone around three times already, there was the damn sign for – Mons. Back to plan ʻAʼ!

Being a technophobe means GPS and I donʼt get along. On one alpine crossing I almost threw one out of a car window as listening to that smug womanʼs monotone voice telling me what to do whilst struggling around hairpin bends, brought back to many traumatic divorce memories.

Preferring to trust in my inner compass, over four decades long European driving experience and knowledge would get us there, it didnʼt. Maybe my ground radar was on the blink, or not plugged in, so I stopped to clear my head and remembered that in France many road signs are often just at, or past, where you expect them to be, or the junction you should have turned left at. NO – I donʼt understand it either.

Still, in the dead of night we sped past Metz, waved at Nancy before heading further south down the crowded Autobahn, after a few hours kip in the back, I started seeing signs for Basel. Pulling up at the Police controlled border point an armed policeman was ordering me to move, by performing an elaborate performance of complex hand signals, to “pull over to the right”.

Immediately there was a loud crunching and scrapping sound from down below. Iʼd driven over, and totally destroyed a very tall traffic cone. AK47ʼs went horizontal, Angus almost sh*t himself as my arms shot up towards Heaven loudly hitting the tin roof .

The officer had definitely pointed for me to go right and as Lucy 2 has LHD Iʼd failed to see the brightly glowing luminous pink and yellow traffic cone on my right, or maybe it was exhaustion, or being relieved at ending our nightmare drive down so many deathly fast German Autobahns, ignoring loud angry lorry drivers. Anyhow, once everyone relaxed it was slowly explained to me in loud stumbling, very slow English, (I chose not to correct his grammar or pronunciation) that ʻall heʼd wanted me to do was to, walk over (not drive) and buy a windscreen motorway toll sticker from the booth.ʼ But you know, when the strong arm of the law points and youʼre behind the wheel it seems only logical they want you to drive over, not get out and walk!

After over twenty four hours on the road I was just too tired even though Iʼd pulled over a couple of times to sleep, but being a new OAP Iʼd failed to acknowledge that with age comes the need for more sleep than when I was a twenty something hippie living in a hand painted VW Split screen van heading towards the French Revolution. Times – and I, have changed!

Once released from the cash window I noticed the display of well oiled armaments had been re- holstered. With my windscreen sticker in place they jokingly allowed me through into Switzerland right into the confusing underground labyrinth of fast winding roads, tiny direction signs and disco lighting which was meant to take me under the city of Basel towards the mountains. Thank goodness it wasnʼt rush hour or Iʼd have gone wrong again. Getting my bearings whilst encased in massive concrete tunnels seemed worst than finding Mons. Itʼs impossible, trying to look at road signs, not hit a tunnel wall and stay calm whilst keeping one eye out for anything saying St Gotthard.

Angus was asleep again. Eventually we surfaced into a snow-covered winter wonderland which in December I should have expected. Back in Scotland Iʼd had expensive winter tyres fitted as ice skating in a couple of tones of old metal down an Alp wasnʼt part of my plan. They now had to prove themselves worth £504.20 as I came up to the “Halt – Road Closedʼ sign, meaning I had to get off the super-duper snow free highway and struggle along on slippery uncleared side roads. Well it was 3.00 a.m and the road clearing crews donʼt start till four.

Never mind I was only about to climb up to the 17 km St Gotthard Road Tunnel using an old 1600cc non turbocharged engine to pull a couple of tones of water-cooled German engineering and another tone of possessions up a very steep gradient. Within a few kilometers we were back on the Autobahn. The kilometers clicked by, my left eye was fixed waiting for the oil warning light to go on, or the radiator needle to announce a burst of steam, whilst my right eye watched the road and I worried about the deepening snow banks.

The old van had probably never attempted anything so strenuous in itʼs 25 year life.

Twice I pulled into a Park Platz for the engine, and me, to cool down. Before I knew it I was confronted by the tunnel entrance where my prayer changed from salvation from snow into asking God to help us make it through the night, into Italy! I didnʼt want to break down buried under several billion tones of mountain. Finally, relief flooded my whole body as we came out under the clear Airolo sky – Italy at last. From there it was all down hill signing ʻLucy in the sky with diamondsʼ as over head the clear night sky was ablaze with specks of starlight, which Angus somehow missed out on, still snoring, deep in doggie dream land his legs twitching, he was probably enjoying a walk somewhere warm, without snow, or me.

Now was the time to really road test those pricy tyres and original breaks. By dawn weʼd come as far as Como, soon signs for Malpensa Airport started springing up everywhere, trouble was I didnʼt want to go to the airport nor be involved in Milanʼs mind blowing rush hour traffic. Eventually I found the right road around the city and on to the Autostrada A4 heading west towards Turin, before searching again for more signs pointing north, towards Biella and for my meeting with another Estate Agent. Unlike her British counterpart this lady was a beaming extravagant dark-haired beauty who’d done all the business getting us a flat, without moaning.

An hour later we pulled up outside her office, the camper covered in two thousand kms of grime and grit, Angus woke up making me think that his only way of coping with the long drive was in a self-induced coma. Weʼd made it without any mechanical nightmares or canine/human aggression. Another hour and feeling relieved I turned the key to my new front door before remembering I then had to drive back down to the city to collect the bed Iʼd bought two months before, when scouting out the city for somewhere to stay.

Three months later, after a great time enjoying everything Italian, Lucy started first time and we set sail south towards Genoa and onto the Cote dʼAzur, planning to eventually cruise slowly up through France to Dieppe and back to Blighty – but thatʼs another story, or two.

After years playing with words, doing a London School of Journalism travel writing course, Keith has finally retired and is now trying to capitalise on those wordy skills. Two books are well underway, one about traveling (The Chocolate Dog Diaries), the other, a dark sinister novel set in Paris – another city he know too well. Although now ʻsettledʼ in Fecamp France he wonders how long it will be until his inner Nomad kicks in again and his itchy feet take him off to his next adventure.