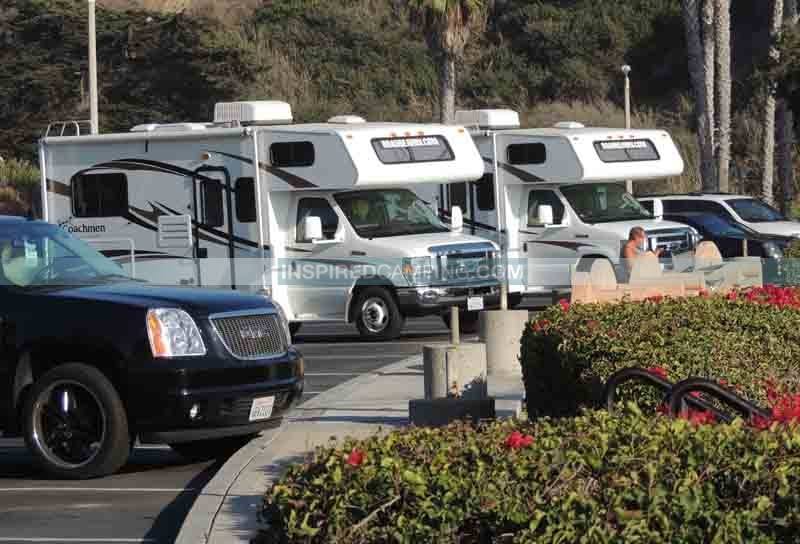 In September 2012 Caroline and I landed in Los Angeles to begin a three week holiday in Southern California camping and exploring along the Pacific Coast Highway (PCH). We were there celebrating our 25th Wedding Anniversary and my 50th earlier in the year and were travelling with Caroline’s sister Linda and her other half Neil.

As a keen surfer I was eager to explore as many of the renowned spots as I could and couldn’t wait to be camping in Southern California. We had no itinerary save to say that the intention was to get to San Diego and back and to take three weeks to do it. The other three nut cases were entered in the Longbeach half marathon on the 7th, October which we intended to take in on the way back up to LA. No reservations had been made leaving us free to do as we pleased.

We had booked C-class RV’s from Roadbear in Agura Hills which is about 20-30 minutes drive north from Malibu. The first day was spent picking up the vehicles and getting going. The vehicles had everything we needed and while they are designed to accommodate 4 people this would have been pushing it a bit. They were perfect for us.

We didn’t travel very far on the first day and stopped at Dockweiler RV Park which is right on the beach at Playa Del Rey, LA. Beach camping is very nice but never again! What we didn’t realise is that the campsite is directly on the flight path from LAX international airport and the planes run at regular intervals all through the night and sound like they’re going to land on your roof! The next day saw us drive to San Clemente where I was to hoover up a new longboard from the Stewart shop. As soon as we reached Orange County the scenery became greener. It had been a bit dry and parched from Malibu down.

We left it too late to book in to a campsite this night but from what we learned from others at Dockweiler the Walmart chain of Supermarkets do not mind you using their car parks overnight. Not the case in California it seems! The manager of a store we spoke to said he had no objection personally but fines are given out by the local police for this. We ended up finding a quiet industrial estate for a spot of free-camping for the night. For the rest of the holiday we used RV parks. Most of these were Ca State Parks with a couple being private ones.

The State Park sites are the best camping spots tending to be only a short walk from the beach and range from 35 to 65 dollars per pitch per night depending on whether you want a sea view or whether you are dry camping or requiring full hook-up facilities. They have toilet and shower facilities. The showers usually require a 25 cent coin or a token. Most also have fire pits for each site – something which seems to be very popular.

At this time of year getting a place on a campsite during the week is no problem at all however it is a different question on Fridays and Saturdays when it seems to be all booked up. Any spare places would be let on a first come first served basis here at home but not in California! They do it on a lottery basis. You have to be there between 8-10 am to put your name in the hat for the draw at 10. This even applies if you stayed there the day before and asked for an extra night, “I’m sorry sir, there are places but you will have to come back at 8 tomorrow morning for the draw”. Apparently it wouldn’t be fair on others to book an extra night at short notice!

There’s plenty to explore along the Pacific Coast Highway. We stopped at San Onofre, San Clemente, Carlsbad (no hook-ups) and San Elijo (no hook-ups) before arriving at San Diego where we booked in at Campland on the Bay, a private site for four nights. The site was huge and had everything you could imagine. We spent very little time there using it as somewhere to sleep while we explored the San Diego area. Campland is a short walk from the no. 30 bus stop on Grand Street which takes you into Old Town, the original bit of San Diego. Well worth a visit. When you get off the bus you can then take the trolley (tram) into the gaslamp quarter of San Diego, bars, restaurants etc. and, if you’re having trouble sleeping, you can visit Petco Park the home of the Padres  to see a baseball game. Girls play it at school home here and call it rounders but it’s big out there!

A $5 note on the bus will cover travel on the buses and trolleys all day – bargain! We liked camping in San Diego. While there we visited Pacific Beach (good bars and night life) and Ocean beach, Point Loma, the dockyard museum and Seaport Village. The return journey then began stopping at Silver Strands State Beach and Moro campground on Crystal Cove State Park (beautiful) before arriving at Huntington Beach.

The State Beach campsite had only opened the previous day. It is a car park through the summer. We spent three nights here. Our pitch was only separated from the beach by the boardwalk and was right by the pier. Now that’s what I call beach camping! Huntington has had a bit of a rough press at times being accused of being too surfy. We found it great. There’s a street market on Tuesday evenings and the bars are good.

The no. 1 bus takes you to Newport for $1.50. You have to have a beer at Blackies by the Sea – a real bar with very cold beer and a lot of history! Don’t look too closely at the dust covering the pictures and surfboards on the walls though! We left Huntington behind and headed for Longbeach where we booked into the Golden Shore RV Resort. It was near the harbour on the edge of the city and only a short walk from the start of the half marathon. A nice friendly private site and one of the best RV parks.

Up early next day for the runners to do their thing. Following the race we headed for Venice Beach. Once seen, never forgotten. You’ve just gotta go. Street entertainers, tat sellers, musicians, busty maidens on roller blades and the body builders at the open air gym as well as more weirdos than you can shake a stick at but all seemingly harmless.

Finally we arrived at Malibu for the last two nights at the Malibu Beach RV Park. Malibu is a strange town / city. It goes on for miles with properties scattered sparingly on both sides of the PCH. We ate at Malibu Seafood just below the RV Park and Dukes. Both were very good. Malibu Seafood is a sort of take away with a seated area if you want it and Dukes is a proper bar / restaurant. Public Transport at Malibu seemed to be sadly lacking however and we had a very long wait for a taxi back from Dukes.

Three weeks of wall to wall sunshine and surfing some world renowned spots meant we loved camping in Southern California. I had some brilliant waves at Cardiff Reef and Huntington although the swells were inconsistent, but ‘hey’ that’s surfing for you. I barely put a shirt on and we could have all stayed for another three weeks. What a fantastic time. We only covered about 580 miles throughout our time.

The Californians are proud of where they live and we found them only too willing to offer help and advice. If you are prepared to go and speak to people you will find out so much and meet some characters – it’ll make your trip so much more memorable. California camping is thoroughly recommended from us and we can’t rate it highly enough for its RV campgrounds, national parks and some of the best campsites we’ve visited.