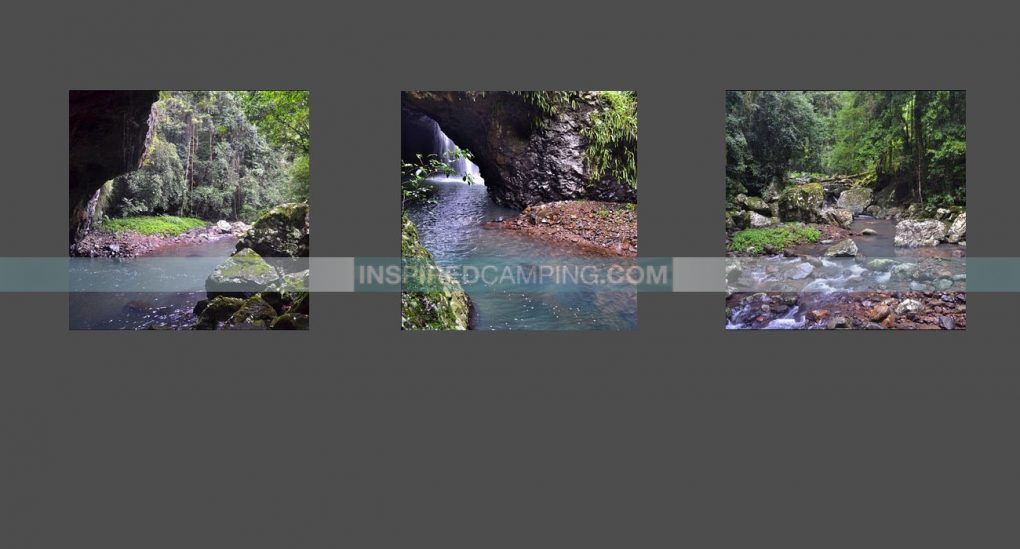 Picture the scene. You’re on an open ended road trip holiday driving in Queensland with no set destination in mind and you see a sign for Springbrook waterfalls. Do you carry on or take the turn and spend a few days camping out in a national park?

On our trip in Australia we had one rule. We’d only do ‘Hell yeah’ experiences. So if we read about a tourist attraction, or passed one, and it sounded ok then it wasn’t good enough. It had to be more than just a yes experience. We’d only do things that made us say ‘Hell yeah’. For same reason a waterfall seemed like one of those at the time.

So we pointed the van in the direction of Springbrook national park. To get there you drive through about half an hour of winding, rising rainforest road. It’s a stark contrast to the coastal views that had made up much of our road trip from Sydney to Queensland and was our first extended venture inland. I’d never actually been in a rainforest before and it was nice to look up at the forest canopy or to look down at the mist over the trees as we got higher. It was like something from a documentary on the Amazon and hard to believe that just a few hours ago we were on the beach.

National parks in Australia have limited spots for camping and caravans. It’s a cheap but basic place to stay. For five dollars a person you get access to a small grass site. There is a communal tap, a drop toilet and two communal barbecues. No shower, no power and the cooking facilities didn’t even work when we tried them.


National parks are something of an institution in Australia and there is a committed set of campers who take up the camping spots there. Sites range from small with only ten or spots too much larger. The hub of the site is the communal cooking facilities which are great for chatting with other campers, making friends and swapping tips about the area.

The facilities were as basic as you would expect but the location more than made up for it. We’d initially intended to just take a look, then it turned in to staying for a night and we eventually ended up leaving after three days. The first day we took one of the short walks out to see the twin falls – two waterfalls close together. That was spectacular but walking back at night when we spotted the glowworms we decided that this place was a little magical and that we wanted to stay a bit longer.

The next day we enjoyed our camping stove breakfast of tea, fried eggs and sausages listening to the random trills and hums from the forest. Camping takes places in a cleared area but the forest is nearby and there are all sorts of random noises at all hours of the day and night. We spent the afternoon taking a 17k hike through the rainforest taking the chance to enjoy the views from the numerous view points, being scared as goannas slithered out of the undergrowth and counting the different types of wildlife we had seen that day.

During the rest of the trip we had a lot of memorable experiences but this was the only time we weren’t close to the beach. Despite our preference for the coast Springbrook seems to be our fondest memory of the trip. It’s not famous, you wouldn’t hear about it as a must see destination in any tourist guides but it was definitely a hell yeah experience for us.

David is a programmer, camping and caravanning enthusiast and contributor to an Australian based caravan website  CaravanParkAdvisor.com