Here at Inspired Camping, we are lovers of all things outdoors including alternative lifestyles and the tiny house movement. The idea of sleeping under the stars and really embracing nature is one that we hold dear. However, that doesn’t mean that we don’t like the idea of being able to do it in comfort and that’s why Telsa’s tiny house off-grid technology has got us so excited.

Glamping gives somewhat of a luxury camping experience. With comfort, with style and with everything that you could ever need. But what does the future hold for glamping?

The answer may come from eco giants Tesla with their tiny house off-grid technology. 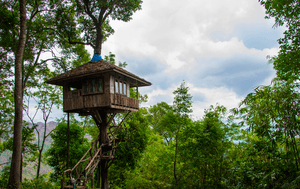 Back in the summer, we came across a news story that covered a new invention that Tesla was releasing. Their tiny house off-grid technology package is a compact home on wheels. They first started touring it around Australia during August and it created quite a buzz.

Although the idea wasn’t entirely new, it was much like the mobile design studio that was seen during 2016, however, some of the tiny house off-grid technology ideas being displayed with the project opens up all kinds of possibilities.

The house itself weighed around the 2-tonne mark and was powered entirely using a 2kw solar generation thanks to the 6 solar panels located on the top of the roof.

Why This Tiny House Off-Grid Technology May Be The Answer

It is no secret that in the world of technology, Apple has moved the markers that many consumers look for with their ‘smart’ devices, and we think that this introduction by Tesla is likely to do the same in the world of off-grid solutions and glamping.

Being able to tow a “mobile home” that can be fully powered through the sun means that if you want to try staying out in the middle of nowhere, really getting up close and personal, then this is something that you can do with ease. It also means glamping businesses can set up in areas that were difficult to reach before.

It is also ideal for those who like the idea of staying outside under the stars, but find even glamping isn’t luxurious enough for them. Whilst the “tiny house” isn’t known for being the most spacious option to consider, it is definitely one that has the comforts from home and gives you an ideal place to spend some time with your friends and family, albeit in a simpler way.

This introduction by Tesla with their tiny house off-grid technology may mean that we see some changes made in the world of glamping and those that are choosing to live an alternative lifestyle, and that is something that we are definitely looking forward to seeing develop and grow over the coming years.

Glamping Worldwide: How It Moved From A Trend To A Significant Industry And Business Model For 2021