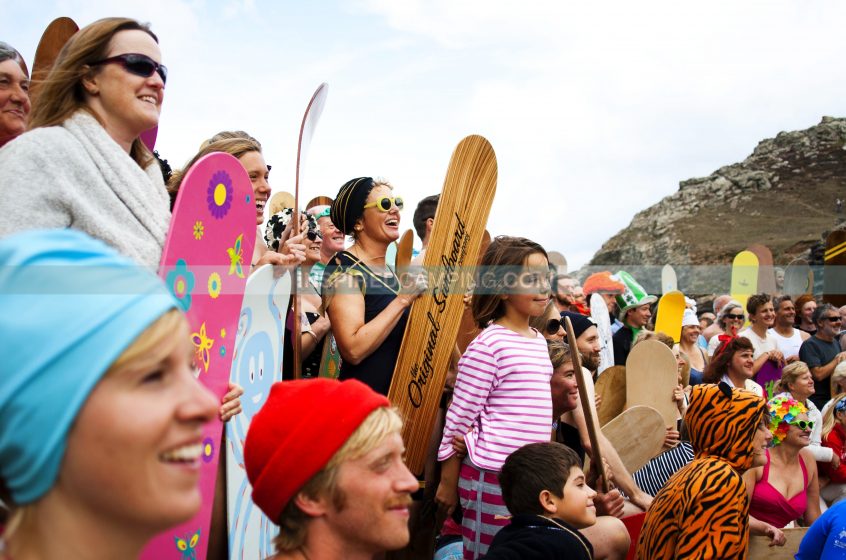 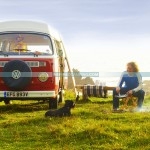 We’ve already had the pleasure of talking to one of our favourite camping experts… Martin Dorey, BBC Presenter of One Man And His Camper Van. We’ve also delved into his first book The Camper Van Cookbook: Life on 4 Wheels, Cooking on 2 Rings which we consider to be one of our camping essentials. So we couldn’t believe our luck when we were also given the opportunity to interview Martin during the very busy launch of his new book The Camper Van Coast: Cooking, Eating, Living the Life. This book, which he wrote in partnership with Sarah Randell and published through Salt Yard Books, is available right now! Images in this article are from the book, which encourages you to immerse yourself in camping, camper vans, the UK coast and every kind of activity associated with them. Take it from us… its inspiring stuff!

We’ve met Martin and his lovely family before as we live in the same part of the UK, and that’s what made our interview with him particularly poignant and moving, as in it he reveals the moment their lives changed completely when they heard some devastating news that set them all off on a journey… a journey that was heartbreaking, but has now been turned by Martin and his family into a positive one… and that’s why he’s featured right here talking about The Camper Van Coast: Cooking, Eating, Living the Life. 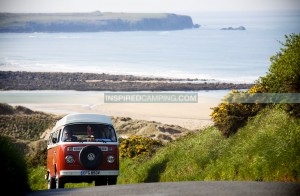 When and how did your journey as ‘The Camper Van Man’ start?

It’s hard to say, although being known as the ‘camper van bloke off the telly’ definitely came about as a result of being on telly, which was a result of my book!!! Having said that I have always camped and have owned VW camper vans on and off since 1994. But before that I had a little Renault van I converted to a camper and before that I slept in a 2CV on some surf trips (don’t – very uncomfortable). Before that I stayed in friends’ vans on surf trips as far back as 1986. But then again my Grandfather was a Scout leader and influenced me an awful lot, so maybe I’ve been building up to it all my life!

Where did your inspiration for your books come from?

The idea from The Camper Van Cookbook: Life on 4 Wheels, Cooking on 2 Rings came about as a result of all those years of larking about camping. I wanted to celebrate the joy of hitting the road in a camper van with tips on how to do things and what to eat. Lots of it came from when I surfed in North Wales with the North West Surf Club. They all had vans and I picked up a lot of stuff from them – particularly exploding egg banjos and the seagull alarm clock. Then again a lot of the food and foraging influences came from living here in Devon. Picking mussels after a surf set me off with that aspect of it. 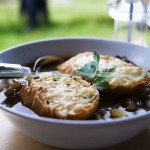 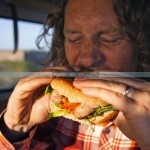 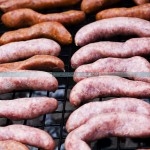 How long did it take to research and write your books?

I am a professional writer so it doesn’t take me long to get stuff down on paper when I know all about it but it’s the research that takes the time. I finished the Camper Van Cookbook in a few months because I knew what I wanted to write. The Camper Van Coast took longer simply because I wanted to put new and exciting stuff in it. For me it’s important to go places to write about them so I made an effort to go on a few strategic forays to experience and photograph as many of the places in the book as I could. I learnt how to sail, took a dry suit diving course, went on a seaweed course, entered the World Belly Boarding Championships, spent a day with my fishmonger and even drove all the way to the Outer Hebrides in the name of research. So, all in all, writing took about a year from deciding on the idea and handing in the manuscript. Then it was 10,000 words too long!

What was the best bit of writing The Camper Van Coast: Cooking, Eating, Living the Life

I loved the Outer Hebrides. We found a wild camping heaven overlooking a fabulous deserted beach with good surf. It was wonderful. The only problem with that was that my daughter Maggie broke her arm falling off a play park just after we got there!! So we had to adjust our plans a little and stayed for less than I would have liked. But in the week we took to get up there we had a ball and went on the UK’s oldest rollercoaster in Blackpool, saw Anthony Gormley’s beach statues at Crosby, made pizza at Loch Lomond and I dived in Oban. We packed a lot in!!!! Even though it doubled as our summer holiday it wasn’t like work! 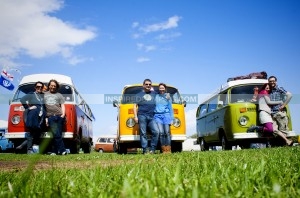 You presented a BBC series based on your first book – What was it like to film, how long did it take and what was the best and worst part of it?

Having the chance to have my own TV series was incredible and sometimes a little overwhelming. It seems a little surreal even now, as it wasn’t something I ever expected or hoped for. It took about 5 weeks to film in total, including rest and travel days between locations. On every filming day I slept in the van. I also carried all my own kit everywhere so all the camping and ‘living on four wheels’ stuff is genuine. The best bits were the evenings after the crew went back to their hotels. We’d film for about 12 or 14 hours each day, finishing with the big meal (which was also my tea) at some fab location. Then I’d be left alone with my van and maybe a fire and a few beers. So it wasn’t too bad at all. The most difficult part of filming was cooking as I’d never cooked for the cameras before. I’m not a trained chef so everything I do is a little bit by the seat of my pants. Happily most of the meals were ok, even though I got to eat them only when the crew finished filming them. That meant, on the whole that my evening meal was cold!

What do you think is the next big thing in the world of camping?

I’d like to see a change in attitudes towards camper vans and motor homes. I’d like to see local councils open up their beachside and beauty spot car parks to responsible campers. For me, being crammed into an overcrowded and soulless camp site can be a little like hell. I prefer to go wild, where I can feel free. The trouble with this is that historically there have been problems with people who litter, over stay their welcome and have no care for the countryside. It turns people off. What we need to do now is to be wild and responsible campers – so if we stay somewhere we should leave it better than it was when we got there – if we can. If everyone who wild camped spent ten minutes picking up other people’s rubbish things would soon change. It’s not a lot to ask but sadly it seems – from knowing the problems they have had with a few wild campers in Loch Lomond – that some people aren’t up to it!

What’s the best and worst thing that’s happened to you in a camper van?

When our eldest was just over a year old she was diagnosed with leukaemia. She and Jo were whisked off in an ambulance to Bristol and didn’t make it home for six months. It was a rough old time and there were moments when Maggie was very ill indeed. We didn’t have a camper van at the time and we swore that if she got through we’d buy another one and take off. Maggie got better so we bought a lovely 1981 T25 and went off to Ireland in it to tour a bit and visit family. Maggie’s little sister Charlotte was born during her time in Bristol so we hit the road with a three month old sleeping on the front seat and a bald 18 month old who was just out of hospital!!! The weather was so bad that we actually gave up and checked into a hotel for a few nights (one of the few times we have done it) but there were moments when it was utter bliss. We were intact and happy and extremely grateful for the life we had. I can remember one day we parked up on the cliff edge at Spanish Point. We put a rug out on the grass and had a family picnic. I went for a surf and Jo dozed in the sun whilst the girls played and slept. I remember feeling ecstatic that we had come so far. Those are the moments we live for. Actually, in a funny way, Maggie being ill may have been what set me off to become the camper van man!!!!

Worst moments? Apart from cracking my head really hard on the TV show and worrying they would cancel the rest of the episodes, not much. We’ve had breakdowns, blown up engines, smashed windscreens and even dashboard fires. But we still love every minute of it. It’s heaven and hell. You appreciate the good times because of the bad. When you realise that, the bad aren’t bad at all. We are lucky people. 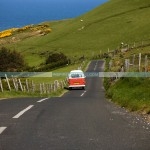 What’s next on the horizon for The Camper Van Man?

I really don’t know. The BBC didn’t want to do any more shows so we’re looking for someone else to take me on. But if that doesn’t happen it doesn’t matter. I have to promote the new book and then we’re off to Ireland in the van to meet up with friends for a couple of weeks in May. After that we have plans to take off for most of the summer if we can. Not sure when or where exactly yet but it will be in the van that’s for sure.

You can buy The Camper Van Coast: Cooking, Eating, Living the Life  from Amazon (with 38% off the retail price of £16.99 at the time of writing this article), however, if you don’t already have a copy of Martin’s first book The Camper Van Cookbook: Life on 4 Wheels, Cooking on 2 Rings  we have 5 gorgeous copies to give away to lucky readers. All you have to do is add your name to the free updates and bonuses box and we’ll automatically enter you into our prize draw (remember it’s free, you’ll get updates before everyone else, we never share your details and you can unsubscribe at any time). If you already have… then you’ve already been entered. We’ll be pulling names out of a hat on Friday 20 April and we’ll email the 5 lucky winners shortly afterwards.

Just think… it could be you!

The Best Camping Gadgets And Accessories For 2019 (And Great Gift Ideas Too!)

How To Select The Best Camping Chair in 2019